As we career headlong into the insanity of mandatory vaccination and compulsory covid certification, it is as well to ask, who is behind all this madness? The easy answer is that it is the politicians, but that is the wrong answer. The politicians certainly play a large part, in implementing the policies, but the driving forces behind these policies are medical. It is the getting together of the medical profession and the government in a marriage made in hell that brings forth into this world the extreme policies of forced vaccination and covid apartheid, underpinned by obligatory state registers, under the banner of covid security. It is as well to remember that there is nothing new under the sun, and humanity has been here before. The last time something similar happened on such a scale was not quite a century ago, in one of the most scientifically and culturally advanced countries in Europe. The time was the nineteen thirties, the place was Germany, and at that marriage made in hell, the banner over the altar read not covid security, but racial hygiene.

It is tempting to dispose of the Nazi doctors as a freak show of minority fanatics who gained temporary largesse during the rise of German National Socialism, unrepresentative of the ordinary German doctor, or indeed other doctors elsewhere or at other times; an aberrance formed in the crucible of Nazidom. But a body of historical research, much of it published in the nineteen eighties, tells us the reality was very different. Far from having Rassenhygiene forced upon them by the Nazis, the German medical profession had long held dreams of forcing racial hygiene on the German people on an industrial scale. By the late nineteenth century, fears were afoot among the profession of a degeneration in German stock caused overbreeding of inferiors. These notions evolved over time into rassenhygiene, or racial hygiene, as a complement to personal hygiene. Just as the individual was exhorted and expected to keep him or herself clean, so too did the German doctors of the early twentieth century see it as their job to keep the collective stock of German people clean, and free from impurity. The profession with its devotion to racial hygiene was ready to start flirting with the Nazis long before the Nazis developed their own versions of racial cleansing; and it was only a matter of time before the two converged and set up a union.

As indeed they did. As Nazi ideology became ever more rooted in principles of biological purity and natural hygiene — picture the blonde hausfrau surrounded by her radiant children — so too did Nazi ways with ‘applied biology’ appeal to doctors. In 1929, four years before Hitler came to power, forty four doctors came together to form the National Socialist Physicians’ League, which became part of the Nazi party, and was run on Nazi Führerprinzip lines, to coordinate Nazi medical policy. Ten years later, almost half, 43-44%, or around 40,000 or more (estimates vary) of all German doctors had joined the League — and so, in effect the Nazi Party. The enthusiasm for all things Nazi didn’t stop there. Over a quarter, 26%, of all male doctors joined the SA (the brownshirts), and 7% of all male doctors became members of the SS. The ultimate source for these staggeringly high percentages is a paper by Michael Kater published in 1979 (in German, see page 610); a summary table published in 1989 can be viewed here. The German medical profession embraced Nazidom with far greater zeal than any other comparable profession.

The intermarriage of the German medical profession’s rassenhygiene and the Nazi’s ‘applied biology’ was fertile ground for the growth of the obscene policies and programs that followed. First came the 1933 Law for the Prevention of Offspring with Hereditary Diseases that permitted  — note permitted, not ordered, meaning the doctors acted voluntarily — the sterilization of anyone suffering from ‘hereditarily determined’ illnesses, including congenital mental deficiency, schizophrenia, manic-depression, hereditary forms of epilepsy, blindness, deafness and serious physical deformity, Huntington’s chorea and chronic alcoholism. To achieve this, the state, with the willing aid of the medical profession, set up compulsory registers for all genetic defectives, while the doctors devised ever more efficient, and barbaric, ways of achieving mass sterilisations.

At the same time, a fundamental redefinition of the role of a doctor took place. The old notion that the doctor cared for his or her patients was replaced with idea that the doctor’s proper role was care for the health of the Volk, or people, or, in the Nazi context, the Aryan race. “The physician understands that a higher task awaits him than the care of the individual human being who has fallen ill, namely, the care of the future of his people,” wrote an influential advocate of the New Order in 1927. A later historian is said to have commented that Nazi doctors believed that “the primary concern of physicians should be the healthy people who [have] the most to contribute to the Volk, and not the care of the sick, the weakly, and the useless who are only preserved in an artificial world, such as the artificial world of the mental hospital”.

The same ideals were advanced Otmar Verschuer, a leading Nazi and geneticist who worked with Mengele, in 1933. Recognising the poverty of individualism as a basis for medical practice; Verschuer declared that a patient was no longer to be treated as an individual, but only as “one part of a much larger whole or unity: his family, his race, his Volk”. Embodied in these principles were the idea of the Volk, or people, as the entity, an organic sum greater than its individual parts, parts that could be diseased and undesirable, and necessitate removal. The German doctors who practised Nazi medicine — the sterilisations, the Aktion T4 programme, and ultimately the Final Solution — deluded themselves that they were practising good medicine, in the interests of the Volk, and of the public health, a delusion many hung on to, even in the face of the Nuremberg trials.

As we in Britain career headlong into the insanity of mandatory vaccination and compulsory covid certification, it is as well to ask, who is behind all this madness? The politicians certainly play a large part, but, as they so relentlessly tell us, they are guided by the science, and that means medicine. As the clamour rises for individuals  to get vaccinated for the benefit of all, do we not hear echoes of the Nazi medical ideal of caring not for the individual, but for the Volk? It has happened before, and not just in Nazi Germany. Perhaps one of the most chilling expositions of the primacy of the Volk comes not from a doctor, or even a politician, but an American lawyer. Upholding the legality in 1927 of forced sterilisation of the feeble-minded in the state of Virginia, Justice Oliver Wendell Holmes famously declared that ‘Three generations of imbeciles are enough’. Chilling enough on its own, but to get the full blast of contemporary chill, we need the fuller quote (emphasis added):

“It is better for all the world, if instead of waiting to execute degenerate offspring for crime, or to let them starve for their imbecility, society can prevent those who are manifestly unfit from continuing their kind. The principle that sustains compulsory vaccination is broad enough to cover cutting the Fallopian tubes. Three generations of imbeciles are enough.”

These words may be the words of a lawyer, but it is not lawyers, or even politicians, who administer compulsory vaccinations, or cut Fallopian tubes without consent. It is instead doctors, who have entered a marriage made in hell. 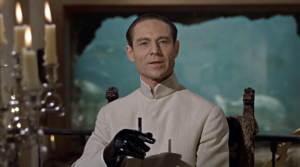